Emmanuelle Ayrton, born in Paris, France, does her primary studies in a bilingual school. After her French Baccalaureate (obtained at the age of 16) she decides to study Art and gets a full scholarship to study at Parsons School of Design in Paris and New York. Parsons School Paris being coupled with the American University in Paris, she also takes journalism and creative writing classes there.

After graduating as a Communication Design major, she works for Carla Hall Design Group in New York. She comes back to Paris, but quickly moves to Amsterdam where she works as a free-lance graphic designer. There she meets her husband Patrick Ayrton, a professional British musician (organist, harpsichordist and conductor).

In June 1995, they move back to France where they now live. Always interested in music (having studied piano as a child), Emmanuelle discovers classical singing in 2001. She starts to draw about her discovery of the voice and ten years later publishes an illustrated book about singing called “Le Chant sans chichis”. Her drawings and unconventional portrayal of the singing world are exhibited several times in France, usually around choral events (e.g. Les Choralies in 2013).

Now a regular performer with various choirs or as a soloist she has decided to depict and share the many tribulations singers go through with a new collection of drawings. In 2012, she meets Joyce DiDonato who expresses her enthusiasm for the project and agrees to write the introduction for Emmanuelle’s book.

Edition Peters publishes her book in 2014 in an English and German version. New versions in French, Italian and Spanish will appear soon hopefully.

In the summer of 2014, while New York’s Metropolitan Opera’s was involved in contentious negotiations, the members of the MET Orchestra contacted her to commission drawings for their newly-created website and social media pages. The goal is to bring public awareness to the musicians’ everyday life in a humourous way and try to break the image of the “stiff and stuck-up” classical musician, which is contrary to the truth. After three years, she has enough material for a new book depicting orchestra musicians and this is what she is working on right now!

Emmanuelle feels the urge to break the image of classical music (and arts) being for “an elite” and only interesting for an ever-aging group of people. With her approachable drawings, she hopes to promote the value of music and arts as a necessity for everybody and especially young people. 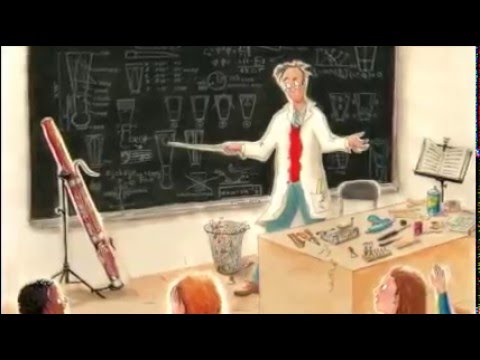